Despite anti-BJP rhetoric, KCR plays his cards close to his chest 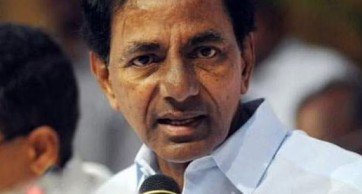 Hyderabad, May 7 (IANS) With just two months to go for the Presidential election, Telangana Chief Minister K. Chandrasekhar Rao appears to be playing his cards close to his chest on the strategy of Telangana Rashtra Samithi (TRS).

The party leaders remained tightlipped on whether it would work with other opposition parties to field a joint candidate or it has given up its reported plans to achieve a consensus among opposition parties after recent elections to five state Assemblies in which BJP has performed well.

During a recent interaction with the media, TRS working president and Chandrasekhar Rao's son K. T. Rama Rao evaded answering a query on whether TRS will work with other parties to field a joint candidate.

"The Presidential election is scheduled in July. So we will discuss it in July," Rama Rao quipped.

TRS chief KCR's visit to Mumbai in February and his back-to-back meetings with Maharashtra Chief Minister Uddhav Thackeray and Nationalist Congress Party (NCP) leader Sharad Pawar had set off speculations that he is trying to unite all opposition parties for the upcoming elections to the posts of President and Vice-President.

KCR had also visited Ranchi in the first week of March and called on Jharkhand Chief Minister Hemant Soren. It was believed that he is trying to work for common opposition candidates for Presidential and Vice-Presidential polls to trounce the BJP-led NDA candidates.

Political observers, however, point out that these meetings took place before the results of Assembly elections. The big victory of BJP in Uttar Pradesh and its win in Uttarakhand, Goa and Manipur put it on a strong wicket for the Presidential election.

The political observers say with strong possibility of Biju Janata Dal (BJD) and YSR Congress Party (YSRCP) voting for NDA candidate, the Presidential election may become a cakewalk for the ruling alliance.

It is believed that after the outcome of Assembly polls, KCR dropped plans to visit other states to sell his idea to parties like Trinamool Congress, DMK, Samajwadi Party and BJD.

In the changed scenario, the TRS chief may not lead the efforts to evolve a consensus on a joint candidate by the opposition parties. He is likely to wait for other parties to take the initiative and sail with them to project opposition unity ahead of 2024 Lok Sabha polls.

At the recent plenary of TRS held to mark the 21st formation day of the party, KCR made no mention of his efforts to forge unity among opposition parties. He merely reiterated that he will play a key role in national politics and will try to evolve an alternative agenda for qualitative change.

TRS had backed NDA in the elections for the President and Vice-President in 2017. The party had defended its stand saying its decisions are in the interest of the nation and the state.

According to TRS, Prime Minister Narendra Modi himself had personally made a phone call to KCR to inform that as per his suggestion, NDA has decided to field a Dalit (Ram Nath Kovind) as the candidate.

With NDA picking Venkaiah Naidu, a Telugu, as the candidate for the post of Vice-President, TRS had extended its full support.

The TRS was then seen as friendly to the Centre and KCR had good relations with Modi. KCR had supported all key decisions taken by Modi. He was the first non-BJP chief minister to support the demonetisation move. TRS also supported GST.

Though KCR had mooted a front as an alternative to both BJP and Congress before 2019 elections, his plans failed to take-off as BJP retained power at the Centre with a huge majority.

Keen to have good relations with the Centre, the KCR-led party continued backing the Modi government on key decisions. It supported the bill to ban triple talaq and abrogation of Article 370 of the Constitution.

However, the alleged raw deal meted out to Telangana in successive union budgets and the Centre not fulfilling the commitments made to the state marred the friendly relations.

In recent months, KCR mounted a bitter attack on Modi and his government. The TRS chief targeted it for failure on all fronts and accused it of creating communal divide.

While in the present situation TRS is not likely to go with NDA candidate in the Presidential election, some political observers have not ruled out the possibility if NDA comes out with a politically neutral candidate acceptable to society at large.

"Considering KCR's recent statements and stance the party has taken against Modi and BJP, it appears TRS will not vote in favour of a BJP candidate. However, the pink brigade might change its position if BJP decides to field neutral candidates from social life for these posts," says political analyst Raghava Reddy.

"As far the political implications are concerned, TRS will try to take an anti-BJP approach; but everything will depend on whether all other opposition parties will rally behind a single candidate," he added.